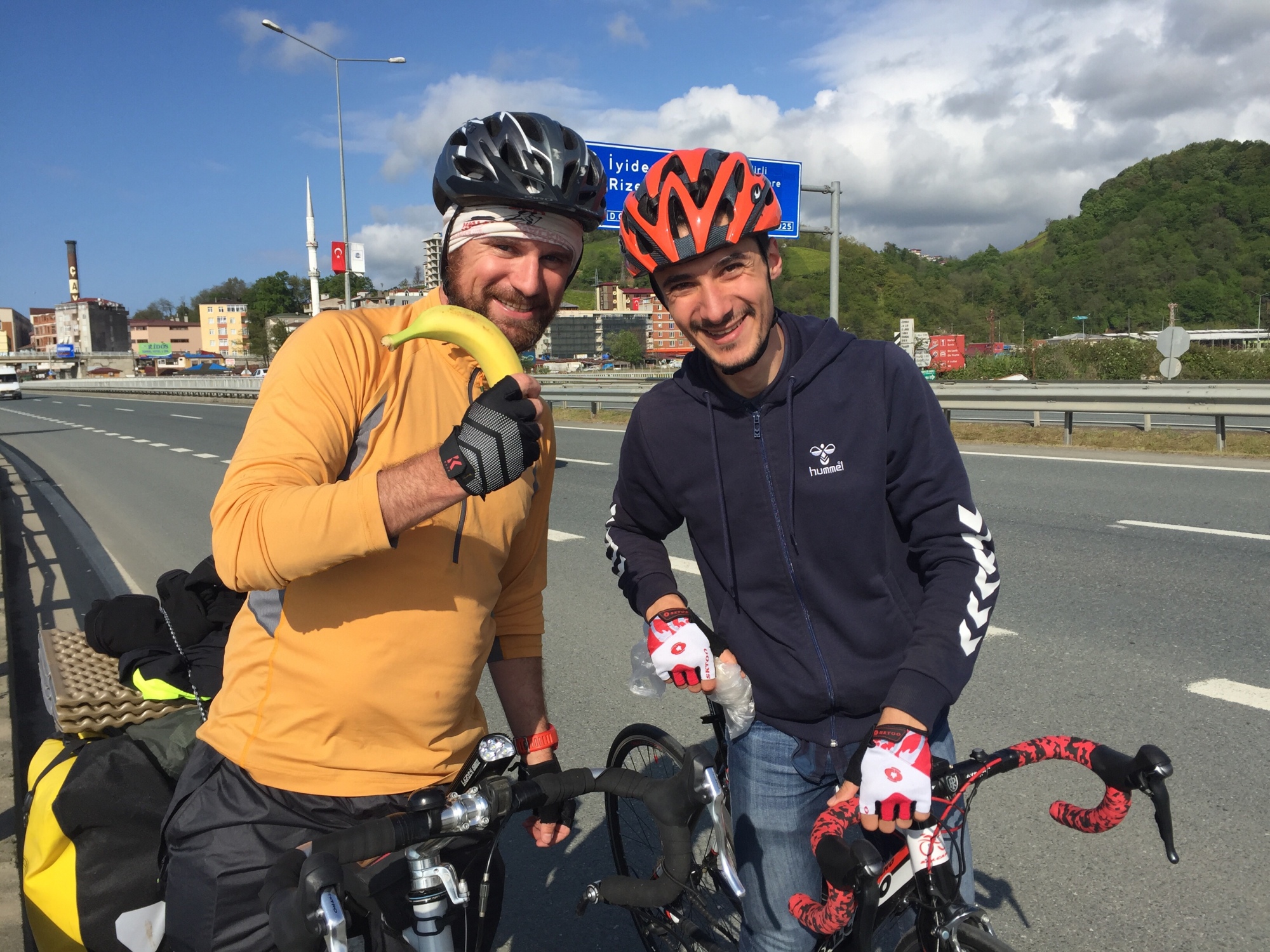 Turkey. What a country!

We left Georgia on the 19th of April. The road was quite good – starting with a red cycle path from Batumi, and leading to a quiet A road all the way to the border control.

Of course we had a bit of a kerfuffle at the border – I wouldn’t have expected anything else! We hadn’t realised, but you can’t pay for a Turkish visa with Georgia’s currency. Kind of makes sense but we had other things going on! (Such as the final piece of the cargo fiasco – first off finding the place where we had to pay to “re-export” our bikes from Georgia, then spending two hours insisting that this had to be done. Good times!)

However whilst we left Georgia literally in mist, we arrived in Turkey to blazing sunshine. That was a good omen that has not let us down yet!

The Turkish people are some of the most hospital people we’ve ever met. As soon as we crossed into the country, we had people shouting ‘merhaba‘ from the sides of the roads, old men smiling and waving, and people asking us what we were up too. And no one was staring! My Z-list celebrity days of Georgia are over.

We stayed in Hopa for the first night. The Lonely Planet book I have on Turkey wasn’t very kind – urging people not to stop there unless they needed to. But we bloody loved it! Probably because it was our first chance to sample the dinner of the gods – the kebap. I was not disappointed.

The next day we woke up bright and early to cycle to a small restaurant recommended by our friend Selcen called Kvacoli Balik. It was a nice days’ ride – just the right amount of sunshine, breeze and goats.

With multiple quick stops for some water and Percy Pigs, we covered the 60km in about four hours, which was pretty good going.

And the restaurant certainly didn’t disappoint! It’s a small joint where they serve what’s been caught from the Black Sea that day, and was firmly no frills.

A friendly local who spoke English came over to introduce himself and help us order. He and his girlfriend were having dinner, and spent a fair bit of time trying to figure out what was wrong with us!

In addition to translating our seafood needs, and worring about our mental health, he also gave some handy tips – such as the fact that Couchsurfing is a surer bet than Warm Showers in Turkey, and that if we were in dire need of a place to stay we could head to any mosque and receive a warm welcome. Both were top pieces of info!

Then the food arrived.

All in all, we had one big fish, 10 little fish, and probably three loaves of bread. It was all wonderful! And in a top piece of sustainability, when we were done the owner threw the fish bits onto the rocks for the seagulls. Win win! Except for the fish of course.

We then headed down the road a bit and found our first wild camping spot, though it was a bit of a bugger to get down to.

A lot of these Turkish coastal points have small pieces of land between the road and the rocky beach, which is fairly steep, and carved into ledges for small scale vegetable growing. Rhubarb seems to be popular, or maybe my horticulturalist knowledge needs to be brushed up..

Anyway there was a bit of rubbish, but the spot was good.

But as we settled in for the night, I told Selcen and our other Turkish friend Orkun what we were doing for the night. They got very concerned, and Selcen even rung up her dad who offered to drive out to us and pick us up to take us back to her family home – and this was at 9pm!

Needless to say, my imagination started getting the better of me. To calm myself down, my head – very soothingly – started a rundown of all the scariest moments of all horror films I’ve watched over the past 15 years. It spanned retro hits such as Deliverance, modern marvels such as Get Out, and of course a bit of the classic camping flick, The Blair Witch Project. Thanks head!

But the fun wasn’t over, as that’s when the torrential rain started! I took a recording, but WordPress won’t let me download it – the buggers.

However we woke up the next day, unharmed, to only a tiny patter of rain. And after packing up we headed off to find breakfast, then mission on to the seaside town of Rize to our next culinary recommendation by Selcen.

Again, we wern’t disapointed. Liman Lokantasi was run by a madman barking out instructions to everyone he rubbed past – and invited us into the back to see what was cooking. He dished us up a bit of everything and I think it was my favourite meal of the trip so far.

In addition the fella above, there was also this ageless beauty carving up the dinner.

He kept waving for me to come over, so naturally I did, and I reckon I’ve found my new career – as a Doner Kebab Artist.

To top it all off – Rize was the town were we finally found camping gas. Here’s Sean holding it up like it’s an Olympic trophy, cause that’s what it felt like!

We continued on, passing lovely seaside towns and villages nestled in the hills.

At one point, a lad on a bike saw us and waved a lot, so we waved back. A few km’s down the road, he caught us up. He’d been to the shop to buy us all a banana.

And I think that’s as good a point as any for a bullet point list, detailing all the ways the Turkish people have been bloody brill:

I think Turkey has some of the nicest people I’ve ever come across. The closest second is Vietnam but it really doesn’t hold a candle. Go Turkey!

I think that’s all for now as it’s quite late. Hope you enjoyed reading. Night! xx