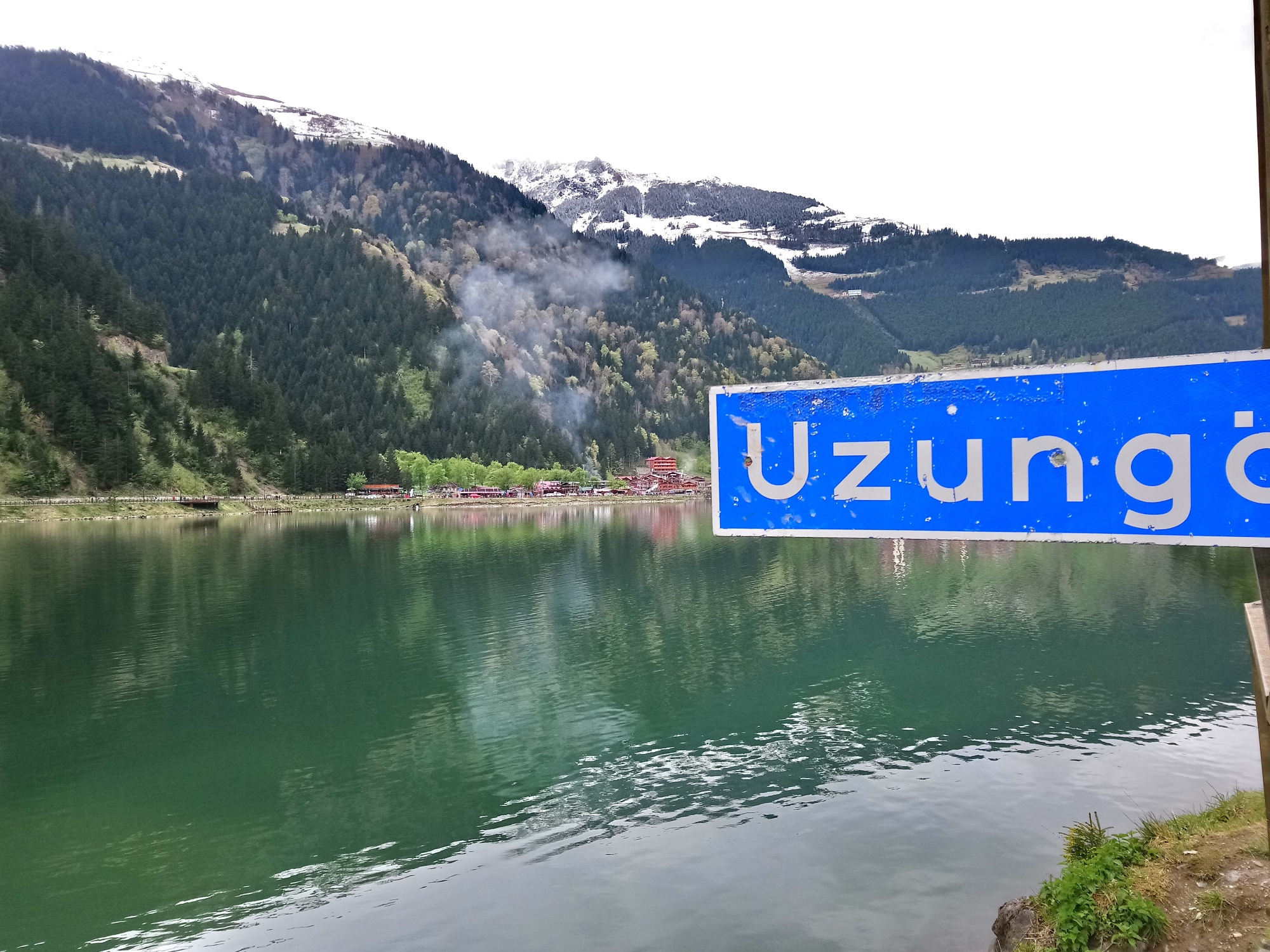 When we last spoke I was loving life in Turkey – and no worries, I still am!

On Saturday night, we’d decided to stay in a hotel in a little town called Of. Of isn’t particularly known for anything (as far as I’m aware), and indeed only had one hotel. But the people were still mega.

A lad in a pide shop started talking to us and asked if we were going to go to Uzungöl. Whilst this semi-half sounds like he was asking if we’re heading into Mordor (that’s a no from me, buddy!), it is in fact a lake. And one that our friend Selcen had already recommended.

Come morning we hopped on an autobus to head on up there, and again the drive was spectacular.

The lake itself is pretty fantastic – it’s like a small slice of Switzerland in Turkey, but with added mosques.

A sign near to the lake hosted some quite interesting facts, such as the area is home to the oldest forests in a temperate zone on earth, and that the forest is green the whole year round due to the abundant rainfall and mild climate.

However the sign also said the forests were home to grizzly bears, which Sean wasn’t sure about. I’m a bit more ‘I read it on a sign. It must be true.’ So was on the lookout!

There are treks you can do, as well as a load of cafes and restaurants dotted around the lake itself. As we didn’t have much time, we did a quick loop of the lake, sunk a few coffees then headed back.

Our next stop on the bicycles was Trabzon, a massive town on the Black Sea Coast. On the way there though, disaster struck! My chain somehow got stuck between the frame and the hub – highly irregular, though no doubt it was a user error!

We were at a bit of a loss as to how to sort it as there was no way either of us could just pull it out and back into place.

I took a snap and uploaded it to the Bicycle Touring & Bikepacking group on Facebook, and about 20 people waded in with fixes in five minutes – it was fantastic! I’m not sure Zuckerburg deserves all the flack if I’m honest…

On our way to Trabzon, I thought we’d reached pinnacle cycling fun with a 2km tunnel to walk through – but the roads leading into the city were an absolute shocker! Hills, masses of traffic and no visible hard shoulder. Hard to think of a worse trifecta.

We eventually made it to – the bottom of the biggest hill in the city. And our hotel was on the top of it. Plus Sean was wearing his cycling shoes which means he’s got all the grip you usually get with ice skates on baby-oiled ice. Suffice to say, we were both pretty glad it was a rest day the next day!

When I say rest, I of course mean a day when I drag Sean to something touristic – usually located on top of a hill. That day’s point of interest was actually built into a mountain. It was the Sumela Monastery.

We took an autobus from the centre of town and paid a total of 30 lira each to go to the monastery, spend an hour taking selfies, then get carted back.

We’d been told by numerous people that the monastery interior was closed until further notice, but I’m still very glad we went. It’s something else. Those monks meant business!

On the way back the bus stopped in Macka for 20 minutes, so we had a quick lunch in a local resturant. A small girl came up to ask for a photo (just with me – soz Sean), then her grandma came wheezing out of the kitchen for a photo op too. I smiled in my seat then she shook her head and motioned for me to stand up. She wanted a full body shot! And what old ladies ask for, I can deliver! My Z list celeb days are back and bigger than ever.

No one wanted a picture of Sean. “Balls” was his succinct response.

That afternoon we walked through Trabzon town, shopped a little and had an early dinner, before working out the quads walking up the hill to our hotel again.

In a bit of personal admin, I had to email Ortlieb about the fastening breaking on one of my panniers. It’s pretty funny, as these bags have an eight year guarantee – which I don’t even think fridges and cookers have! – and I managed to break one within 10 days. As my pops Jorge Mulliner would say, if there’s a wrong way to do it..

One of the cool things about the area we were in was the buzzing high street, Ortahisar Mahallesi. It looked just like a student town high street in the UK – but instead of bars and a few donner kebab shops, there was about 100 coffee shops and roughly 12k donner kebab shops. It was great! If you’re after either a donner or a coffee.

The next day we were back on the road, aiming to get to Giresun.

We had a resturant recommendation to get through first though – this time Orkun’s. It was a seanfood joint called Kaan Olta Balik. And again it did not disapoint!

We then cycled on, hoping to find somewhere discrete to wild camp, but the coast was littered with towns and it wasn’t looking promising. Then we rounded a corner to a nice-looking hotel, and at 140 lira for a night included breakfast, we were sold!

Taka 61/Mavi Kiyi Restorant and Hotel is the nicest place we’ve been in. And for the price, I’d definitely recommend to anyone!

5 thoughts on “Uzungöl, Trabzon and Sumela – aka how to be a massive tourist in Turkey!”